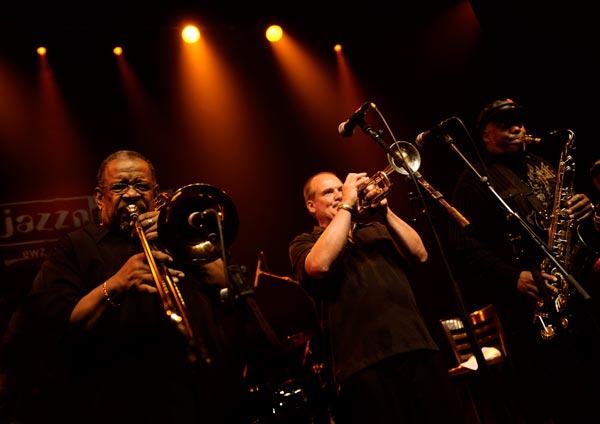 There is no crisis for music festivals if you have solid and reliable sponsors, a very sought-after component of any festival. Among other things, you also need a good programme and decent infrastructures. It may sound too easy but the Zurich festival JAZZNOJAZZ starts from here. Sponsored by the electric power station (EWZ) and the Zurich Cantonal Bank (ZKB), JAZZNOJAZZ 2011 offered four nights of a sparkling mixture of Jazz, Funky, Fusion and Soul grooves. Prices varied from 10 to 80 Swiss franks for an excellent choice of artists, from Klaus Doldinger, to Brian Auger, Fourplay, Randy Crawford with Joe Sample, Joy Denalane, Raul Midón, Selah Sue, Charles Bradley, Imany and Ben L’Oncle Soul. Concert sites, all in the same street, previously were key places of the industrial activity in town and they get a sort of raw charme that only old buildings possess. Il Popolo del Blues was obliged to take a tough decision and we decided to watch the concert of one of our early heroes: Hammond master Brian Auger (without the never forgotten Oblivion Express) and the concert of another Daptone Soul jewel, the singer Charles Bradley. In what it could be defined a bygone era, year 1972, Brian Auger and the Oblivion Express were a popular set in the early Italian rock scene. Auger was already a most famous Hammond player because of his time with singer Julie Driscoll in a group called Trinity, and even earlier with the British Blues group Steampacket. Since those heroic days, Auger would have played with an impressive list of musicians and artists. Almost forty years later his sound, almost a family affair with his daughter Savannah on vocals and his son Karma on drums, is still fresh and powerful. Karma is drummer with a lot of energy and groove, Savannah an inspired singer: their rendition of Donovan’s # The season of the witch # was one of the highlightes of their concert. And what about Brian ? First of all, nobody could say that this man is 72 years old, he barely looks 55 and his playing is terrific as usual, aggressive and mellow, funky and groovy. He is a real master of the Hammond organ, a musician that all serious organ-players should see once in their life. The next evening, a crowd attended Charles Bradley‘s concert, which was not totally convincing, mainly due to the lack of cohesion of his musicians. The 62 years old Bradley, whose voice is often associated to James Brown’s one, and has a long career behind him, played the songs from his last album # No time for Dreaming #, one of the best 2011 Soul albums. Bradley has a great personality and a strong, very powerful voice; his concert was enjoyable and the crowd was absolutely satsfied with his outstanding performance. Don’t miss JAZZNOJAZZ at its 14th session!